This page informs about replacing your hard disk with a new one. This will give you more free space to store your files, but most importantly will speed up your Windows! Eventually your old hard disk can be reused to create a back-up of your personal data as an external storage location (Creating an automatic back-up with SyncBack).

The easy way: imaging the old to the new hard disk

You have to change all settings and reinstall all software as a consequence of reinstalling Windows. By imaging you are able to prevent all these time consuming operations because all data is copied exactly to the new hard disk. The next step is switching the hard disks and you are finished. More information how to do this later on.

It's not that difficult to replace your old hard disk. Disconnect the power first and open the computer. Usually, the hard disk is within reach and connected with an IDE cable of 80 or 40 wires. Disconnect this cable and the power connector (yellow, red and black wires) carefully. Unbolt the hard disk and replace it with the new hard disk.

In most cases there are two IDE-controllers available on the motherboard, named primary and secondary IDE-controller. On both connectors an IDE cable can be connected with each the possibility to connect two hard disks, CD or DVD player (four in total). One of them is called the Master and the other Slave. The old hard disk is probably connected as Master to the first IDE controller.

ATENTION: There is a difference between IDE/PATA hard disks (in this case) and SATA hard disks (which are connected with a small cable). The procedure for replacing a SATA hard disk is similar to IDE hard disks, except there is no need to set a Master or Slave setting manually. Be careful if two SATA hard disks are configured as a RAID configuration (two or more hard disks cooperate together). Be aware that a SATA hard disk can only be placed in an external case with SATA support. 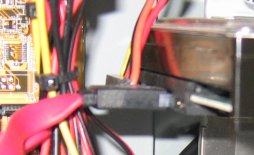 Follow the instructions to set the new hard disk to master because it will replace the old hard disk.

Connecting the cables is easy, there is only one way to connect them! In most cases the IDE cable is colored at one side. This side of the cable indicates the connection of the first pin. If the numbers of the pins are mentioned somewhere near the IDE connection on the hard disk (0-19 en 20-39), it's clear how to connect the cable. In most cases the first pin is located to the left of the jumper settings.

Boot the computer with the new hard disk

If all cables are connected, switch on the power and make sure the bios recognizes the new hard disk. In most cases, this information is shown on the screen. You will see something like primary master, primary slave, secondary master and secondary slave. If you are not sure, start the BIOS setup (press DEL for most motherboard) and check the IDE settings.

ATENTION: There is no operating system on the new hard disk which will result in an error message. Don't worry, this will be fixed by installing Windows or by imaging Windows from the old hard disk.

TIP: In some cases the BIOS does not recognize the new hard disk because at the time of creating the specific BIOS there was no such hard disk. In most cases this can be fixed by updating the BIOS (see the motherboard manual for instructions how to do this). With a tool like CPU-Z (download: www.cpuid.com) you are able to determine what type of motherboard is used. By placing the old hard disk as master you are able to boot Windows to be able to search the internet.

ATENTION: If the setup results in a Windows partition which is not C:, reboot the computer and restart the setup procedure! This is the case when there are no partition at startup while the CD player will receive C: as drive letter.

Restoring the personal files from the old hard disk

After reinstalling Windows on the new hard disk, it's time to restore the personal files which are safely stored on the old hard disk. There are two options: insert the old hard disk into an external case (see the page about creating a backup automatically) or connect the hard disk as slave or as secondary master. Be aware of the correct jumper settings in case of the second option (probably it's easier to disconnect the CD-player temporarely).

Windows will recognize the hard disk automatically. In the Windows Explorer, you will see one or more extra drive letters appear which correspond to the partitions on the old hard disk. The page about creating a backup of personal data tells you the default location of personal data, if you are not able to find them.

The easy way: imaging Windows from the old hard disk to the new hard disk

ATENTION: After the complete hard disk (Windows + personal files and settings + current misery) is imaged to the new hard disk, there is no need to copy personal files anymore. It's an exact copy of all the files which saves you a lot of time!

How to image the hard disk?

So, if you are satisfied with the current Windows installation my advise would be to image the old hard disk to the new one. This procedure saves a lot of time! This is done by connecting both hard disks as described below:

LET OP: If you don't like to disconnect the CD/DVD-player you can also connect the new hard disk (3) as a SLAVE on the first IDE-cable. To do this, you probably have to change the jumper settings of both hard disks which will be unpractical if the old hard disk is still in place.

Copying the old hard disk to the new hard disk

To copy all the data including the operating system from the old hard disk to the new hard disk, you need extra commercial software like Norton Ghost or True Image. But actually you can also do this with free imaging software: Partition Saving (download: www.partition-saving.com) which has been discussed on the page about creating a system image. The only thing you have to do is create a bootable MS-DOS disk (www.bootdisk.com, I prefer Windows ME Custom, No Ramdrive). Download the zip file and copy the file savepart.exe to the disk.

TIP: HDClone (download: www.miray.de/download/sat.hdclone.html) can be used as an alternative tool to copy the data from the old to the new hard disk easily within a Windows environment (in stead of MS-DOS). The freeware version has some limitations compared to the commercial version (like some missing features and a slowed down transfer speed). However, these limitations are no problem for cloning the hard disk.

After you have booted in MS-DOS you can enter the command SAVEPART which will give you the following options:

Select Copy an element. In next window you select Disk number 0 because you want to copy the old hard disk which is probably the first if you followed the above instructions. The screen also shows the second hard disk, called Disk number 1. The size of both entries are also given, which is a verification of the chosen hard disk. The smallest hard disk must be the old hard disk.

In the next windows you choose to copy all sectors by selecting Disk - all sectors. The next question will be what hard disk to copy to. Probably there is only one left, the new hard disk: Disk number 1. After a check and a warning, all sectors will be copied to the new hard disk. This process may take some time, but it's worth waiting for!

The partition(s) on the new hard disk will have the same size as before. There is still a part of the hard disk which is not used (if a 80 Gb hard disk is replaced by a 250 Gb hard disk, there will be approximately 170 Gb left over). By creating an extended partition with Windows Disk Management (Control Panel, Administrative Tools, Computer Management, Disk Management), this area can be used as well.